When it comes to insurance, Italy is most certainly a forerunner.

This is because records show that the first ever insurance contract was signed in the city of Genoa, which is towards the top of the boot-shaped country.

While agreements had been made before this, they had never been previously committed to writing. The way in which the policy worked was similar to its predecessors - in the late 1700s BC, merchants funded their shipping through loans from rich individuals who were prepared to lend them money. 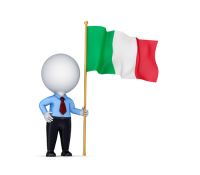 These sums were repaid with interest, but only if the goods arrived safely. If disaster struck mid-transit, they didn’t have to pay a penny. Such a written agreement marked a landstone in the history and development of insurance.

According to the chapter on Italy in the book ‘World Insurance: The Evolution of a Global Risk Network’ by Peter Borscheid and Niels Viggo Haueter, the Italian insurance market had been faring well up until the 16th century, which is when the Italian economy collapsed. This had an adverse effect on this industry. However, by the beginning of the 19th century, insurance companies that brought new life and growth into a sector that had very much been beleaguered.

There is scope for growth in the modern Italian insurance market in pretty much every sector, according to a report by Argus de l’assurance. Only car policies have an above-average penetration and this has been attributed to the fact that a large proportion of individuals own cars, there is a high claims ratio and third-party cover is mandatory.

In an article on Post, country manager in Italy for CNA Europe Danilo Saitta said he believes professional indemnity cover could well grow to be another key player in the market as a whole. This is because there is a rising quantity of compulsory covers for insurance agents, brokers and advisors.

Brokers appear to be struggling to gain a foothold in the general insurance market as a whole. The industry is monopolised by agents, although that is not to say that brokers are necessarily fighting a losing battle. Lloyd’s country manager in Italy Enrico Bertagna is quoted by the publication as saying that agents have been the “main distribution network of the local insurance companies” and this “hasn’t helped brokers to gain a large share of the market”. The introduction of two new laws will hopefully make it easier for brokers to be successful and gain business. Firstly, the 2005 introduction of the New Insurance Code has “disciplined the distribution system, trying to make it more flexible and competitive”, while also removing any sense of exclusivity in the partnership between one insurance firm and its agents.

In addition to this, the Bersani law has forbidden ten-year contracts being non-cancellable and country manager for XL Insurance in Italy Maurizio Castelli believes these are “important steps in the right direction”. Mr Bertagna points towards the fact that Lloyd’s has worked alongside brokers and helped them in their attempts to win clients. “It’s been a win-win situation because we have been able to help them and they have brought business to us”, he commented. While brokers are certainly finding it difficult to assert their authority in a sector that is dominated by agents, it remains to be seen whether or not the next few years will present a change in the landscape of insurance in Italy.